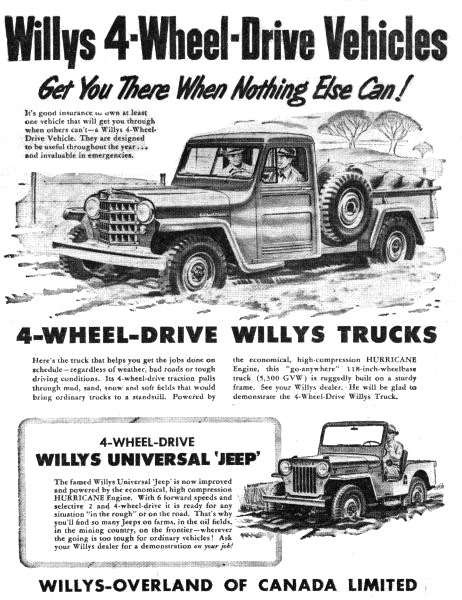 Alden Jewell sent along a couple more 1953 Willys newspaper ads. These are larger display ads which appeared in Canadian newspapers but are probably based on artwork prepared for Willys in the U.S. As with some of the 1953 Farm Journal Ads, the first one features both the Willys truck and the Universal Jeep and sells them as working vehicles.

The picture at the bottom is a version of the Universal Jeep found on the 1953 Jeep Transportation for the Oil Industry brochure. It's another one of those inaccurate CJ-3B drawings apparently modified from earlier CJ-3A illustrations. 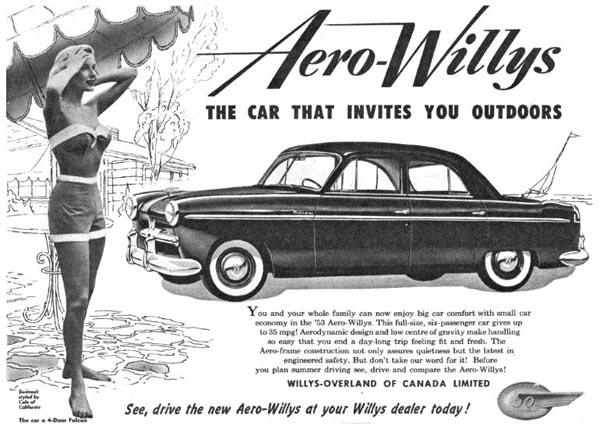 Willys might not have been advertising the Jeep as a fun vehicle, but somebody at the ad agency obviously thought the Aero-Willys could be sold as a sexy car. They must have been looking at the headlights. (See also a 1954 Aero-Willys TV commercial on YouTube.)

This ad appeared in the 30 May 1953 Toronto Star Weekly, but the small print tells us the swimsuit was designed in California (and that the Aero is the 4-door Falcon model.) Also at the bottom is the Willys 50th Anniversary logo (see When the CJ-3B Was New.) 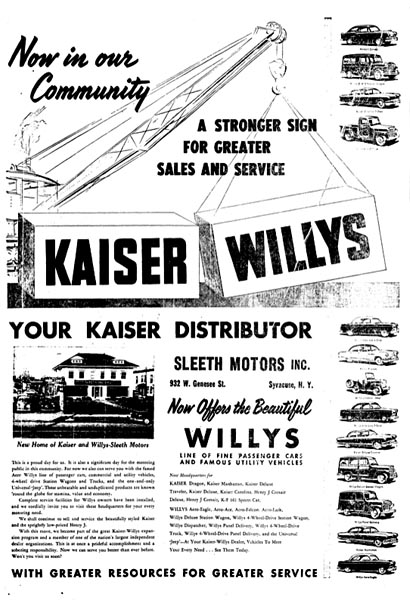 The Aero-Willys and the CJ-3B Universal Jeep both appear in this 12 December 1953 announcement in the Syracuse NY Post-Standard by Kaiser dealer Sleeth Motors, that following the merger of Kaiser and Willys they would now also carry the Willys line of vehicles:

"With this move, we become part of the great Kaiser-Willys expansion program and a member of one of the nation's largest independent dealer organizations. This is at once a prideful accomplishment and a sobering responsibility."

You can read the full text in a closer look at the bottom half of the ad (180K JPEG) which I found at NewspaperArchive.com.

Thanks to Alden Jewell for sending the Canadian ads. -- Derek Redmond