There have been various cross-promotional deals between Pepsi-Cola and Jeep, from the 1960s into the 2000's, including Jeep giveaways and Jeeps painted with Pepsi advertising (280K JPEG). Perhaps the first such deal was the production of limited-edition DJ-3A Surrey Gala Jeeps for some Pepsi bottlers in the U.S. in 1959-60.

In his book Jeep, Jim Allen mentioned that "A handful of Pepsi Galas were produced in 1959 for a giveaway in Tulsa, Oklahoma, and featured a yellow color scheme with Pepsi hubcaps." This was the first time I had seen a reference to these Jeeps, and it got me started on the hunt for details. 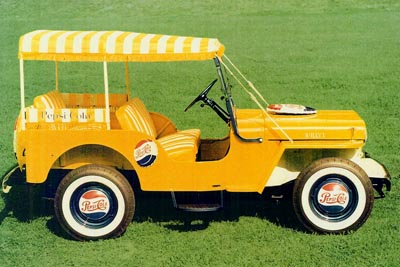 This side view shows the design proposed for the project, but the distinctive yellow paint job was not actually used on the Jeeps as delivered. 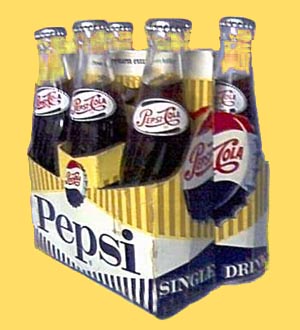 In the 1950s, Pepsi-Cola had moved away from its image as a "bargain brand," and was being advertised as the beverage of the fun, well-to-do, "sociable" crowd. A marketing tie-in with Jeep must have seemed perfect; Willys was starting to target the recreational, second-car market, after more than a decade of trying to sell Jeeps mainly as working vehicles. And Pepsi's new, innovative "swirl" bottle, and the yellow-striped six-pack carton, both seemed to fit with the style of the Jeep Surrey. 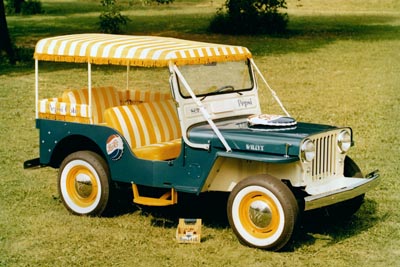 This alternate proposed color scheme was closer to what was finally selected, but using a dark green which apparently was also being incorporated into Pepsi packaging. The presence of an empty Pepsi carton suggests that it's there for paint color reference rather than promotional purposes.

Thanks to Phil Dillman of the Pepsi-Cola Collectors Club for finding this image. 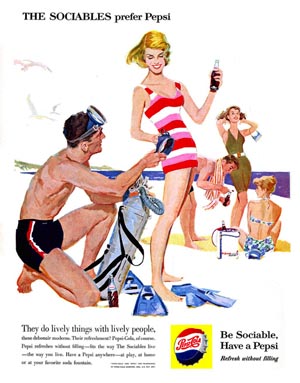 This 1960 ad says that "The sociables... do lively things with lively people," and what better vehicle for those activities than a Jeep? Another 1960 ad shows some convertibles (110K JPEG) although I haven't seen any Pepsi ads of that era which actually included a Jeep.

The "Be Sociable" slogan was so familiar that when Soviet Premier Nikita Khrushchev and U.S. Vice President Richard Nixon sampled Pepsi at a Moscow international trade fair in 1959, newspaper photos were captioned "Khrushchev Gets Sociable."

1961 brought a new slogan: "Now It's Pepsi For Those Who Think Young," as marketers recognized the increasing importance of the younger, post-war baby boom generation, while trying to maintain the brand's appeal to all demographics. In 1963 it became "Come Alive! You're In The Pepsi Generation," and in 1964 a new product, Diet Pepsi, was introduced.

In the end, the Surreys delivered by Willys to Pepsi-Cola in 1960 (below, left) had the same Cerulean Blue paint being used on the standard blue Surrey Gala (below, right) but with yellow and white upholstery. Its off-white windshield and radiator guard appear to have been Plantation White (see Willys paint chips, 100K JPEG) rather than the Glacier White used on the standard Surrey. This photo by Bob Christy shows a Pepsi Surrey lined up with the popular Tropical Rose/Coral Mist version, and the Cerulean Blue/Glacier White version, at the 2016 Toledo Jeepfest.

A March 1960 article (150K JPEG) in Willys News reported that "The largest single order received to date for the recently introduced 'Jeep' Surrey is one for one-hundred units placed by the Pepsi-Cola Company. Typical of the Surrey-Pepsi-Cola promotions is the campaign which is being sponsored in the Tulsa, Oklahoma area. Eighteen Surreys will go to this section. Twelve will be put into service as utility and delivery vehicles by bottlers in the area. Six will be given as promotional prizes, five in consumer contests, and one in a sales contest among the company's route salesmen in the area."

The photo below from Willys News shows those 18 Surreys posed (at some effort no doubt) on the steps of the Administration Building at the Toledo factory. 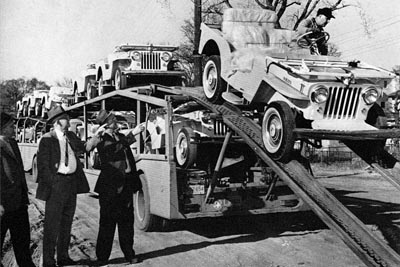 A photo in the Summer 1960 issue of the Pepsi-Cola World employee magazine shows the delivery of a dozen of the Surreys to Tulsa bottler Joe Branham in March 1960.

The Pepsi-Cola World article "Fringed Benefits" (270K JPEG) provides more background on the origin of the Jeeps. It mentions the prototype displayed at the February 1960 Bottlers' Convention in New York, and the the 18 vehicles promptly ordered by the Tulsa bottler, but doesn't mention the "eighty on the spot orders" claimed in the Willys News article. 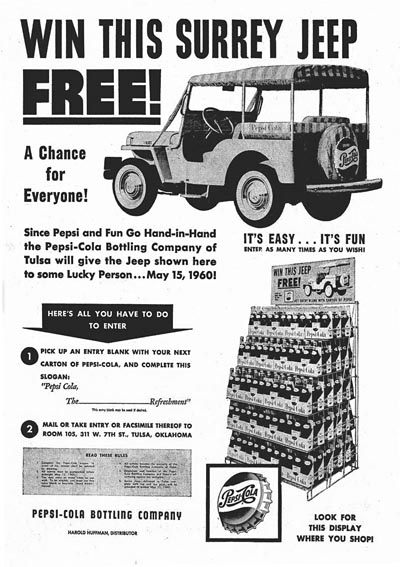 Tulsa Pepsi and their ad agency launched a contest with the grand prize of a Surrey Jeep to be awarded just two months later, on 15 May 1960. This full-page newspaper ad found by Colin Peabody was published in the Miami, Oklahoma Daily News-Record on 11 April 1960. Contest entry forms came with cartons of Pepsi, although the small print said you could also use the entry blank from the ad, or a facsimile.

The article above in Pepsi-Cola World in fact mentions there were two contests held in Tulsa with Surreys as prizes, the first of which generated 43,910 entries suggesting a slogan for Pepsi. (The winning suggestion was "Pepsi-Cola, the light refreshment.")

Another Surrey went to Tulsa Pepsi's top local salesman in a five-month competition, and apparently eight salesmen purchased Jeeps for their personal use. (This leaves 7 of the 18 Surreys unaccounted for.) 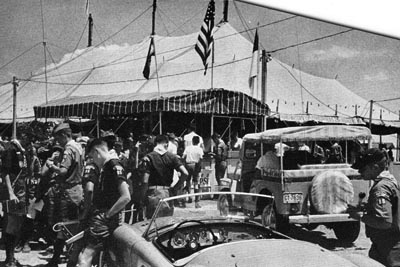 The Fall 1960 issue of Pepsi-Cola World included a photo showing one of the Surreys, with a Colorado license plate, at a Boy Scout event in Colorado Springs.

Thanks to Phil Dillman for these Pepsi-Cola World clippings.

Like all Surreys, the ones sold to Pepsi-Cola had standard 1960 DJ-3A serial numbers (see Willys-Overland Production Figures 1945-1961) so it's impossible to know how many were produced. Slight differences in the details of examples that have surfaced in the Midwest and in Tulsa, suggest that some special paint may have been done locally for Pepsi bottlers. But it seems clear that the choice of vehicle was part of a national marketing strategy initiated at the 1960 Bottlers' Convention mentioned above. 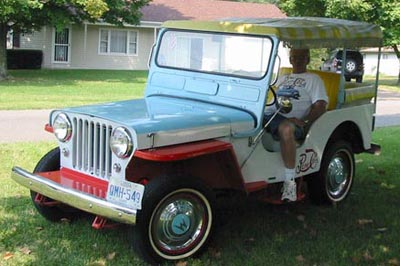 Neal Reynolds, seen in this colorful example, says: "I've worked for the Portsmouth, Ohio bottler for 33 years and this Jeep from what I've been told was a promotional item available to bottlers from the parent company, Pepsi-Cola Company which is now PepsiCo. This Jeep runs and drives. I have driven it 120 miles at one time with no problem at all. Rain or cold would not be good as it has no heater and the vacuum-operated wipers don't work anymore. I believe it is a 1960. It is currently being stored in our Columbus, Ohio facility." 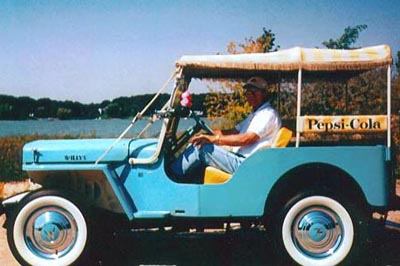 Raymond Wierda Jr. is seen in a Pepsi Surrey he inherited from his father in Michigan. Raymond has now passed the Jeep along to the next generation.

Raymond's son Michael A. Wierda says, "The way I heard the story, my grandfather purchased it from a man who bought his condominium in Florida, who was from Milwaukee and had 5 Pepsi-Cola franchises. He bought one Surrey for each of these, to pull floats in parades. A trailer hitch was on all of them. So there were at least 5 Pepsi-Cola Surreys commissioned in 1960." 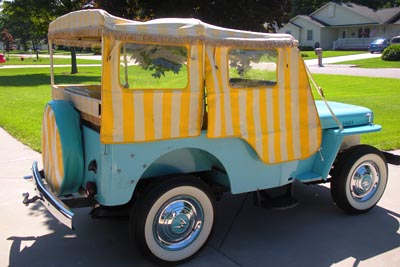 "The color is a seafoam blue/green. The wheel wells and the trim are a creamy off-white. The canvas for the doors and side curtains is all yellow/white stripe. All is original except the spare tire cover which I had custom made for him as a Fathers' Day gift a few years ago." 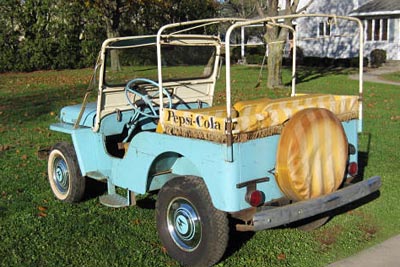 A similar, nice example turned up in 2012 in Massachusetts with the slightly earlier serial number 56337 18362. It includes the original spare tire cover. See also a front view and the engine (70K JPEGs). 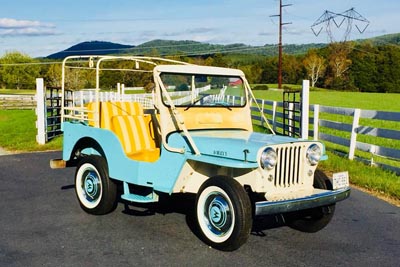 Another Surrey in beautiful condition was photographed by Dylan Forrest. Again, the white here appears to be a cream color rather than the standard factory Glacier White. In fact, this one looks like the windshield frame may have had yellow paint on it at some point. 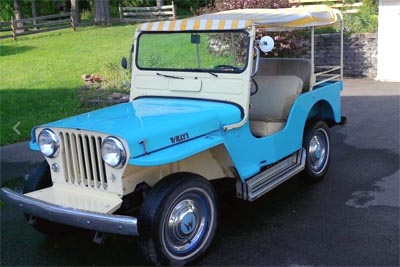 An example for sale in upstate New York in 2018 was restored about 20 years previously, with the side steps removed. This Surrey has 1960 serial number 56337 18403, very close to 18398 which survives in Tulsa but has been repainted (120K JPEG), so this one is probably also one of the original 18 from Tulsa. 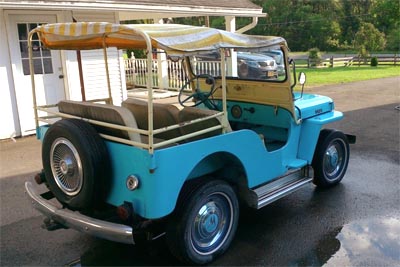 It still has the trailer hitch, unusual for a Surrey and intended to pull promotional trailers. See also the very basic dashboard (250K JPEG) and the engine (120K JPEG) with the original DJ-3A air cleaner. 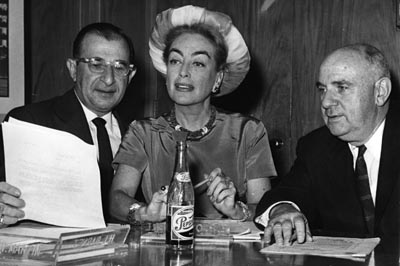 The official hostess for that Pepsi-Cola Bottlers' Convention held in New York on 1-4 February 1960 was Hollywood actress Joan Crawford.(1)​​She had recently been appointed to Pepsi's Board of Directors, after the death of her fourth and final husband, Alfred Steele, who had been Chairman of the Board and CEO of the company.(2) In this 7 May 1959 Associated Press photo, she is seen attending her first meeting of the company's board of directors in New York.(3)

An interesting coincidence is a report from Westhampton Beach on Long Island NY that in the mid-1950s Crawford "could be seen driving an aquamarine Jeep Gala around Westhampton Beach when she spent vacations here."(4)

Is it possible that the original Pepsi Jeep displayed at the 1960 convention was Joan Crawford's idea?

According to Willys-Overland Production Figures 1945-1961 there were also 12 DJ-3A Jeeps produced in a stripped-chassis version in 1960; it's interesting to speculate what kind of special vehicles they were turned into.

Meanwhile, I'm interested in hearing about any more of these Pepsi Jeeps, and more information about their production and use.