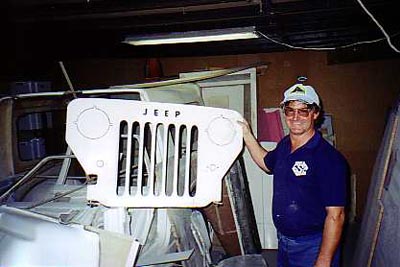 Years ago, Chris Medlicott drew our attention to Steve Whitton of Prosel Fibreglass in Hamilton, New Zealand, who makes fiberglass bodies for a range of 4WD vehicles including the Jeep CJ-3B. In 2004 we got some photos taken in Steve's shop. Steve is seen here with a high-hood grille, in one of a series of photos taken for CJ3B.info by Adam Caplan. 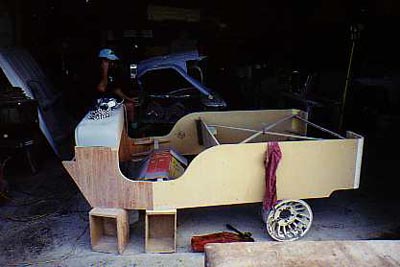 Much of Steve's high-hood work is for Mahindra Jeeps imported from India into Australia and New Zealand. A long-wheelbase Jeep tub seen here is for a Mahindra CJ-4A. See also a metal tub used as a template (40K JPEG) and a drawing for a four-door Mahindra tub (30K JPEG.) 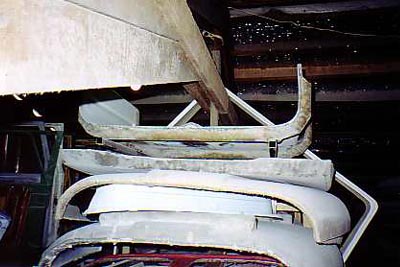 Steve does a range of flatfender aned more recent Jeep bodies, as well as other vehicles. As of 2004, Steve says, "We are very busy producing early 2-door Range Rover standard and modified for clients, and heaps of FJ40 and FJ45 Toyota Landcruisers."

Dealing with individual orders and shipping from New Zealand to North America has been an obstacle for Steve; he comments that he "would be keen to export to the States if a suitable distributor was interested." 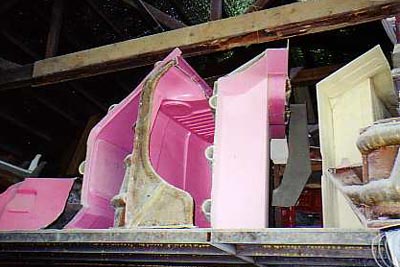 Sample 2001 prices supplied by Chris Medlicott included $1900 NZ for a 3B body tub, $400 NZ for a one-piece front end, $70 NZ for a windshield skin, $200 NZ for a hood, and $110 NZ for an outer grille. Steve says prices have all gone up a bit since then. But the exchange rate is favourable ($1 NZ = $0.68 US as of November 2004) and the light weight means overseas shipping is not prohibitive, so prices in North America could be quite competitive. 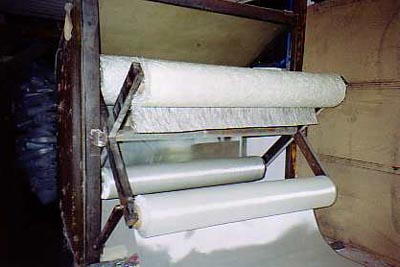 Photographer Adam Caplan says, "Because it is all hand-laid glass reinforcement, it has incredible strength but maintains its light weight. Stuff done with the gun has such a thick layer of fiber that it is strong because it doesn't move. His stuff is resilient because it has a lot of good flex, but doesn't crack."

Chris comments, "I have seen a very nice CJ-5 which I thought was original until I saw a Mahindra dash badge. Turns out it was a Prosel CJ-5 body on a shortened CJ-4A Mahindra chassis and running gear. I was impressed with the finish which was good enough to have me fooled." 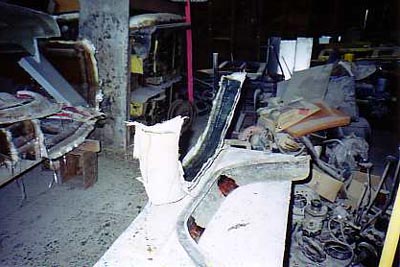 Steve adds, "I am currently building a CJ-3B to use in the bush. It will obviously have a 'glass body, on a shortened CJ4A chassis with standard mount 2" CJ-5 springs, 6-point rollcage, Toyota Landcruiser PTO winch from J20 T18 gearbox and D20 transfer case. Power will be from a Landrover Discovery 3.9 injected alloy V8 adapted to T18. Axles are Scout front and rear D44's fitted with ARB airlockers. I am investigating the option of converting a Bronco front D44 hi-pinion diff for use in the rear with full floater axles. Need some money to complete, so have to make more bodies..."

Thanks to Steve Whitton and to Chris Medlicott, and Adam Caplan for the photos.

Maybe if everybody interested in the idea of an accurate 3B fiberglass tub contacts Steve, and mentions 4WD Fiberglass to a few dealers, some momentum could build toward finding an importer. -- Derek Redmond