Why did they take the Jeep to Colorado? 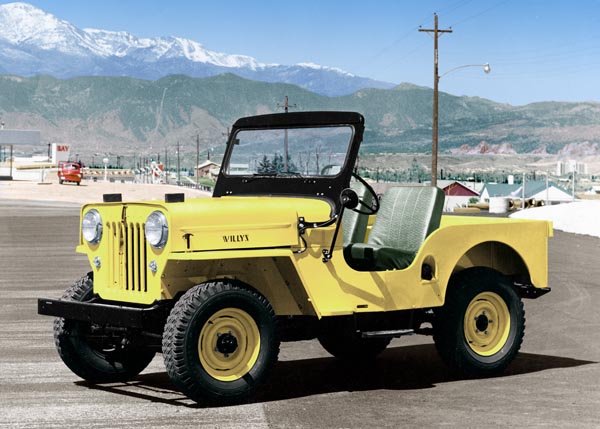 I originally posted this photo with the question: where was it taken? Chris Woolley of Colorado Springs CO immediately identified it as being taken there, looking west to Pikes Peak in the background.

It's an 8x10" black & white print found by Vaughn Becker, which I colorized for CJ3B.info with Arena Yellow as the paint color.

The label on the back of the print says "Kaiser-Willys Motors 3A-1762, Willys Motors, Inc. Toledo 1 Ohio." That number 3A-1762 and the style of seat upholstery suggest the date is circa 1962.


Arena Yellow was apparently no longer a standard Willys color in 1962 (see Willys Paint Samples 1959-65) but there is evidence that some CJ-3Bs were delivered in yellow under Paint Code 999 ("special paint"). Since this factory photo was shot in such an unusual location, why not also give it an unusual paint color?

The presence of a Bay Petroleum service station in the background (see the large copy of the photo, 330K JPEG) had suggested the location was somewhere in the Southwest states, since most Bay stations were in the South or Southwest.

The Bay head office was apparently in Denver, which did make me wonder if the photo might have been taken in Colorado. But if there was some connection with that company, why would the Bay sign be so far in the background?

(For a better look at the same type of roadside Bay sign, see a photo of a Buick filling up at a Bay station in Tallahassee, taken by Harvey E. Slade on 10 February 1961 at the southwest corner of Thomasville Road and 6th Avenue, Tallahassee FL. Photo courtesy of the State Library & Archives of Florida.)

And if Willys had travelled to Colorado specifically to get Pikes Peak in the background, it would seem odd that they then took the photo in a parking lot with a gas station behind it. So there must have been another reason the Jeep happened to be there. 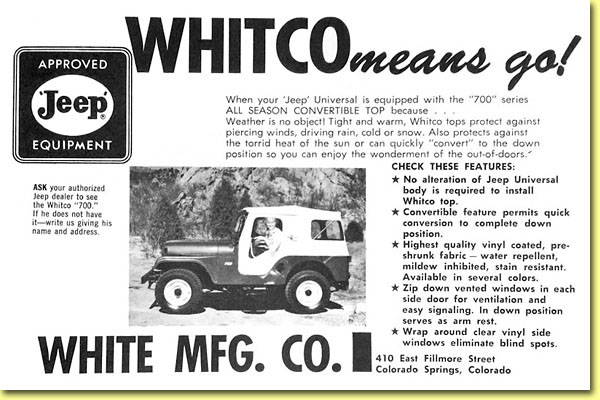 The White Manufacturing Co. plant, which made "Whitco" factory-approved vinyl soft tops, was located in Colorado Springs from 1959 until it went out of business in 1991. (See an article on the history of Thor Products & White Automotive, at eWillys.)

So it seems likely that Willys would have sent Jeeps to Colorado for measuring and test fitting tops! 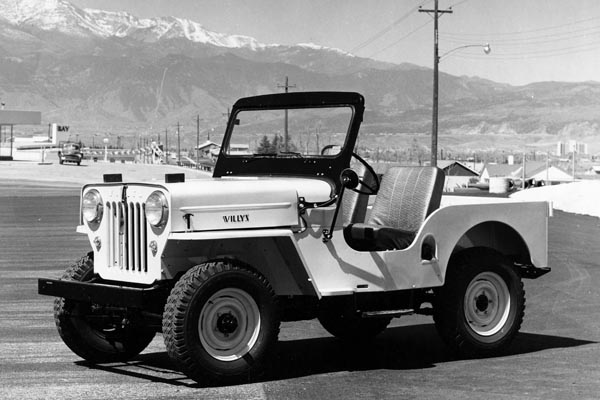 I think the CJ-3B sent by Willys was actually painted Glacier White, which stands out nicely in the original grayscale print. Most publications at the time were printed in black & white, so Willys usually distributed black & white 8x10" glossy prints.

A version of this photo with the background removed (50K JPEG) was used in advertising including the brochure Meet the Whole Jeep Family (160K JPEG). 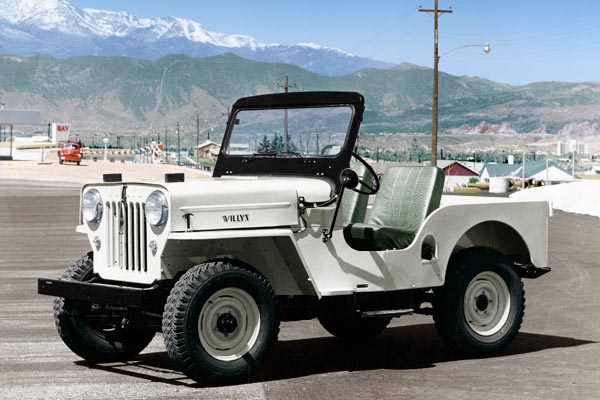 Glacier White is perhaps not as eye-catching against a color background as it is in grayscale, which may be another reason why Willys didn't use this picture in color. (Again, the version seen here was colorized for CJ3B.info.) 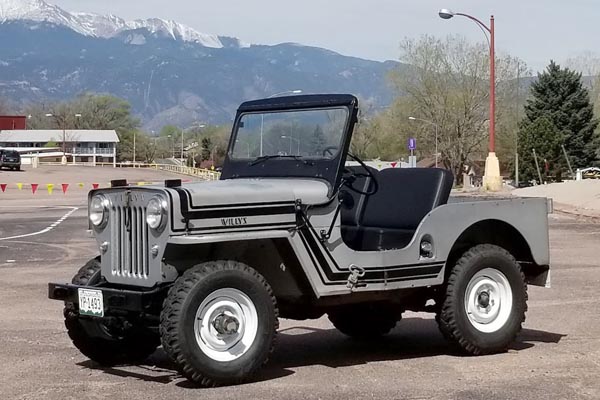 The Whitco plant in the early 60s was at 410 East Fillmore Street, but Chris Woolley could see that the photo was not taken there. To match the perspective of the mountains, Chris took his 1963 CJ-3B over to Palmer Park Boulevard in May 2018, and managed to find the exact spot where the Jeep was posed in 1962!

It's the parking lot of a small strip mall, about 10 minutes from Whitco. We're not sure why the Willys photographer happened to take a picture here.

The neighborhood hasn't changed much in 56 years, except that the trees have grown up, hiding some of the background. The Bay sign and the overhead power lines are gone, and a light pole stands on the big concrete base which had just been poured in 1962. Chris also took a wider shot (420K JPEG) showing more of the parking lot. And Google Streetview provided a view of the parking lot seen from Palmer Park Blvd. (420K JPEG). 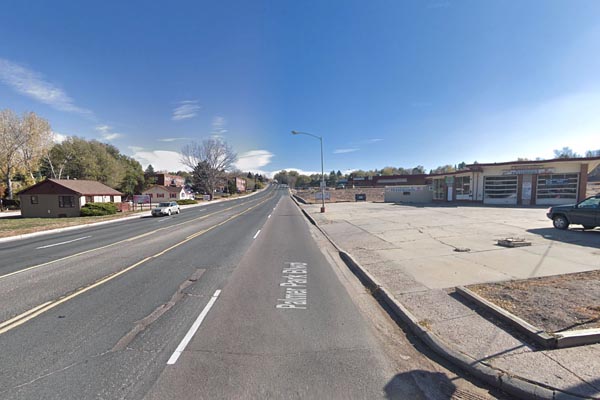 Also from Google Streetview, looking east, back up the hill toward the parking lot, this is the former Bay service station (260K JPEG) with the base of the old Bay sign seen on the right. It's now the home of Ray's Automotive & Transmission.

On the left are the two houses seen in the 1962 photo, just above the rear of the Jeep. 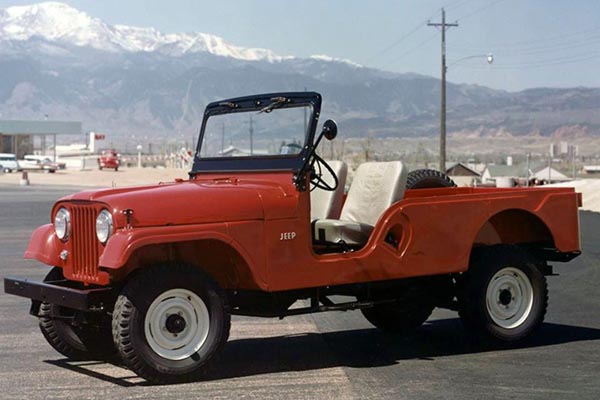 A CJ-6 was photographed in color at the same spot in 1962, just a few minutes later, judging from the shadow under the bumper. This suggests that the 3B photo was also originally in color, although it was printed in black & white.

The fact that more than one model was on hand in Colorado Springs, also supports the theory that they were there for test fitting Whitco tops.


Note on wheels: The CJ-3B and CJ-6 both have wheels with a narrow rib around the wheel disc, although without the tabs for attaching small hubcaps. I think this type of disc indicates 15-inch wheels, which were becoming the standard on Universal Jeeps in the early 1960s. Chris Wooley's '63 also has the 15-inch wheels.

Thanks to Vaughn Becker for scanning the original photos. And thanks to Chris Woolley for identifying Colorado Springs, and doing a great job of duplicating the 1962 shot 56 years later! -- Derek Redmond

Return to Unusual CJ-3B Photos or to more CJ-3B Advertising and Literature.

Last updated 7 May 2018 by Derek Redmond redmond@cj3b.info
https://cj3b.info/Finds/Mountain.html
All content not credited and previously copyright, is copyright Derek Redmond