Hitch Up the Old and the New

The 1962 advertisement below for a Phoenix Jeep dealer, is headlined "Hitch Up the Old and the New" and it tells a story. Unfortunately it's a story that as of 2011 seems to be ending. It's the story of marketing the Jeep brand by evoking the heritage of this simple, elegant machine, and the story of how a piece of technology connects us with history.

The ad from Ray Korte Rambler-Jeep places the practical, modern Jeep (and Rambler) in the context of the history of the automobile industry, the village blacksmith, and famous brands of the old west. It makes a convincing case that the old values are still alive in the "RK" brand and the vehicles it sells.

Although this ad is an impressive and unique example created by a local dealer, it also has some similarities to much of the advertising created over the years by Willys-Overland, Kaiser, AMC, Chrysler and FCA to sell Jeeps by referencing the vehicle's history.

The advertisement appeared on 11 February 1962 in Arizona Days and Ways magazine, a Sunday supplement that ran from 1953 to 1965 in the Arizona Republic newspaper. 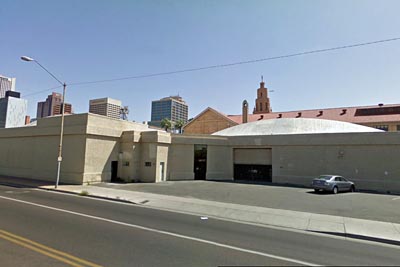 The Ray Korte building on VanBuren Street in Phoenix, seen at the bottom of the ad, was still standing as of 2009 (right). Ray Korte, Sr. had opened a Kaiser-Frazer dealership in 1944, then moved to this location in 1959, after buying the Willys Jeep dealership from Tovrea Supply Company (who sold Jeeps and farm implements in east Phoenix), and also acquiring an American Motors franchise. 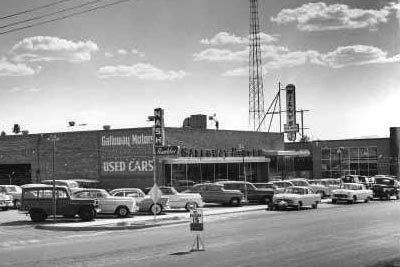 Colin Peabody in Phoenix recalls, "Tovrea also had the Jeep dealership in Tucson and in 1951, sold it to Galloway Motors, which was still in business into the early 1980s, when Galloway sold to his son in law, Steve Christie. Galloway sold Jeeps, Kaisers (saw my first Darrin there) and later Ramblers and Chryslers. This photo of Galloway Motors in Tucson was taken in about 1956. Steve Christie sent it to me a few years ago." 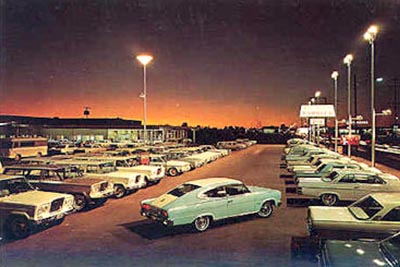 After the death of Ray Korte, Sr. in 1964, Ray Korte, Jr. moved Ray Korte Rambler-Jeep further north in Phoenix, to Camelback Road. This photo must have been taken soon after the move, judging from the new 1963-64 Wagoneers on display. The CJ-3Bs were probably way at the back of the lot. In 1970 Ray Korte, Jr. sold the Rambler-Jeep business and purchased a Chevrolet dealership over in Scottsdale.

Thanks to Tanner Collision for recording the history of the Tanner and Korte dealerships, and Nashparts.com for this photo.

See Willys Engineering on CJ3B.info for some details on Ken Jordan and his work on designing the new Wagoneer. Everybody from designer to dealer is part of the story on CJ3B.info.

Thanks to Glenn Byron and tjcollectibles on eBay for the scan of the 1962 ad. -- Derek Redmond