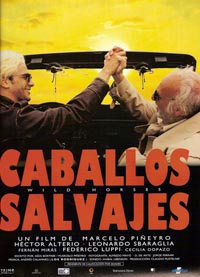 We're beginning to realize how many CJ-3Bs survive in excellent condition in Argentina after being sent there as M606 military Jeeps in the mid-1960s. So it shouldn't be surprising that one of the most successful films to come out of that country includes an appearance by an M606. Caballos Salvajes (titled Wild Horses in its English language release) is a 1995 film directed by Marcelo Piñeyro.

It's interesting that Caballos Salvajes has quite a bit in common with Children of Nature, the Icelandic film about a senior citizen on the run from the police in a CJ-3B. In a review in Box Office Online, Lael Loewenstein suggests that "Wild Horses is cut from the same cloth as Butch Cassidy and the Sundance Kid and Thelma and Louise. Partly an outlaw movie, partly a road movie, and partly a coming-of-age story, Wild Horses is filled with elements familiar to Hollywood cinema. But it also has a distinctly Argentine twist."

"Two disparate men, Jose (Hector Alterio), a septuagenarian anarchist, and Pedro (Leonardo Sbaraglia), a young banker, find themselves thrown together under extreme circumstances. In an opening sequence that far outpaces the rest of the film, Jose enters Pedro's bank and threatens suicide unless the young man gives him the $15,000 that Jose says he's owed. Seizing Pedro as a hostage, Jose finds himself in over his head. But soon he's taking tips from the young man, who to his own surprise, becomes a willing accomplice.

As Pedro and Jose head for the Brazilian border, they discover that the bank was involved in money laundering for the mob, and they're carrying hundreds of thousands of dollars which they distribute to needy people along the way. The local newscasters turn them into Argentina's Butch and Sundance, as they are pursued by the police, the bank and the mob.

The film was shot in Buenos Aires and in Patagonia, the southern province of Argentina which stretches down toward Tierra del Fuego.

Shortly after this pause at the beach, they have to change a flat tire (50K JPEG) and the vibration dampener under the side-mounted spare is revealed in the frame enlargement by Federico J. Cavedo. (See The Vibration Dampener on CJ3B.info.) Some of the Argentinian military Jeeps kept the side-mount spare, while others had a rear mount added. In a right side view (50K JPEG) we also get a good look at the jerry-can bracket on the right side of the cowl, common on the Argentinian M606s.

As they drive away with the flat stashed in the back, the rear details of an M606 (50K JPEG) are all visible, including blackout taillights, pintle hook, bumperettes and trailer electrical socket.

Ken Bushdiecker has watched the movie and adds a few more comments: "The first shot of the Jeep in this movie shows what looks to me like an original back seat. Later in a couple of clips there is evidence of some strange looking frame substructure. Nothing is stamped Willys, so we know it's post-1964. The blackout taillights, left front fender blackout driving lamp, a rear pintle hitch and a foldout w/s all indicate M606.

"No lockout hubs on this rig. It has what appear to be correct Kelsey Hayes wheels, seen in the flat tire scene. A long manual handle is shown attached to the vacuum wiper motor. In one clip a dash tag in Spanish is evidenced. Also notice in the two pictures at the beach: a log holds the Jeep from rolling down the not-so-steep hill. Maybe the parking brake is questionable...."

Barry Walters of the San Francisco Examiner says the film "is so accessible and entertaining you might think it was from Hollywood if it weren't for the Spanish dialogue. The unlikely pair become friends as the film is filled with beautiful countrysides, gentle comedy and endearing drama. The plot is a bit thin, but the acting -- particularly Alterio's -- is rich with pathos and charm." We also get to ride with Pedro and Jose in the Jeep (20K JPEG).

Soon they've got another accomplice -- a woman, Ana (Cecilia Dopazo) -- on board, and the three outlaws begin plotting their final, surprising escapade. Probably because of Ana's presence in the film, RottenTomatoes.com says that if you like Wild Horses, other films that may interest you include Bandit Queen.

The Jeep has seen some wear and tear and repair, but is basically a pretty solid example of the mid-sixties M606s used by the Argentinian military, many of which were sold as surplus in the early 1990's. Another frame enlargement shows the ventilating windshield and repainted hood (50K JPEG).

There are some other interesting vehicles in the movie, including the Citroen being pushed here by Ana. (The Citroen 2CV rivals the Jeep CJ for longevity; it was produced in various versions from 1949-1991.) There's also a chase scene with some big trucks (30K JPEG).

The police show up at one point in a Willys Rural station wagon (50K JPEG) with the distinctive Brooks Stevens bodywork. Federico identifies it as a Brazilian Rural rather than the Estanciera wagon built by IKA (see IKA Jeeps in Argentina on CJ3B.info) and also guesses that the two-pane windshield is due to breakage, which is common on the gravel roads of Patagonia.


Thanks to Federico J. Cavedo in Buenos Aires who told us about this film and made frame enlargements. -- Derek Redmond


See some real M606 Jeeps in Argentina on CJ3B.info.