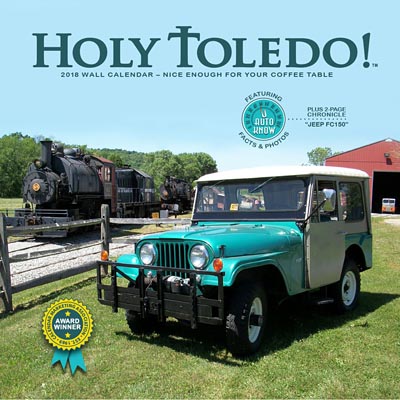 Norris-Banonis, publishers of The Dispatcher magazine, are back with Holy Toledo! 2018, one of the best calendars in their 11-year history.

This year of Jeeps starts off with a bang with Mark Smith's rare 1962 CJ-5 factory hardtop (left) for January. Like several of the other Jeeps in the calendar, you may have already seen this one featured in The Dispatcher or elsewhere. But don't worry, not only will you get the biggest and best photos of these classics to hang on your wall, but each month includes bonus literature and details you have probably never seen before. 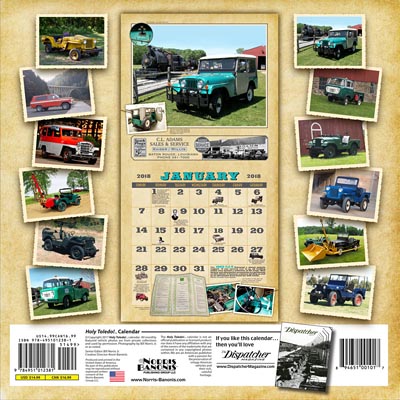 There's only one vehicle from the AMC era this year, a 1974 SJ Cherokee, beautifully photographed by owner Dennis Woyma. And speaking of great photos and interesting details, check out Greg Bowles' 1951 Station Wagon with its matching teardrop trailer and Thermador Car Cooler.

There are five flatfenders in the group, including two military entries, neither of which is painted olive drab! There's Lloyd White's 1943 Marine Corps MB in USMC Forest Green paint, and Nicholas Oxender's 1951 US Navy yellow Valentine APU jet-starting Jeep, with some great bonus info.

From the later 1950s, the calendar has John Ittel's CJ-5 trencher, and a couple of nice Forward Control trucks. Plus the well-illustrated two-page feature article at the end of the calendar, on the history of the FC. It's a great bonus, although personally I think I would prefer to have an essay like this to read and refer to in The Dispatcher rather than at the back of the calendar. 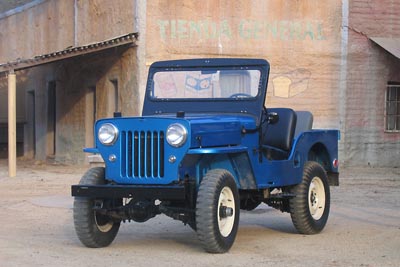 Of course the highlight for high hood fans is September 2018, when we'll be flipping the page to reveal Dean Lachasse's 1965 CJ-3B, which has also been featured on CJ3B.info (see Last CJ-3B Sold Stateside?)

Calendar editors Bill Norris and Kevin Banonis have made that page even more interesting by including the story of the Melody Ranch motion picture studio in California, where Dean photographed his Jeep.

And once again, for every month they have also included dates in Jeep history, just one more reason this calendar is a fun addition to the garage or office wall. -- Derek Redmond


Holy Toledo! is currently the only calendar in the Norris-Banonis lineup. It can be ordered online at dispatchermagazine.com, and the price is $14.99 each, plus $6 shipping in the US. (If you have a big house, you can get the 10-pack for $110.00!)

See the most recent year and previous editions of the calendar reviewed on CJ3B.info.