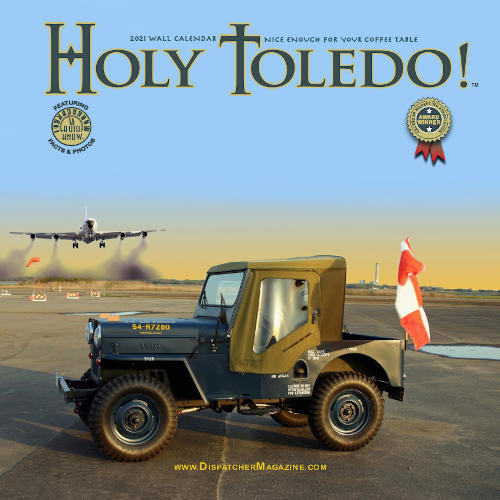 Full disclosure: I'm proud to say that the cover photo on this year's Holy Toledo! calendar is an image supplied by CJ3B.info. It depicts Art Sesso's U.S. Air Force CJ-3B at Offutt AFB in Nebraska, as a Cobra Ball RC-135S reconnaisance plane takes off in 1969.

It's one of only a couple of flatfender Jeeps in the 2021 calendar; this year's edition leans more toward pickups and station wagons! But it's also one of a number of the vehicles that have interesting stories to go with them. These stories, along with the great photos, are what make this calendar "nice enough for your coffee table," as publishers Norris-Banonis like to say.

The early 1963 2WD Wagoneer seen here for November, was photographed in front of the Willys-Tillinghast mansion in Toledo, a huge Tudor structure with a strange connection to John North Willys. Other history-packed photo locations include the Stegmaier Brewery in Wilkes-Barre PA, the Glen Oaks Ranch in California, and the Esslingen Ordnance Shop in Germany.

And how about the blue and cream 1965 Super Wagoneer bought by Edgar Kaiser himself, and used by his teenage sons to carry the gear for their band known as The Carousels? Could there be a Jeep collector's item cooler than that?

The trucks range from a nice 1949 pickup, to what is probably the latest Jeep model yet to be featured in a Holy Toledo! calendar, a 1985 CJ-10. This white truck is a rare example of a CJ-10 in North America, although the "utes" were popular in Australia, where they were known as the J10.


If you're a CJ-3B fan and you have the 2020 calendar on your wall, you're going to be reluctant to take down the December photo of Bob Miksch's mint red 1960 3B. But never fear, the USAF 3B on the runway is ready for January 2021! -- Derek Redmond

Holy Toledo! can be ordered online at dispatchermagazine.com, and the price is $15.99 plus shipping.