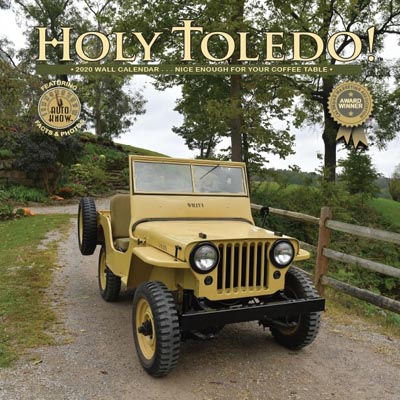 Holy Toledo! 2020 is available in plenty of time for Christmas. The annual publication from Norris-Banonis is always a treat, but this year's edition is notable both for the number of rare Jeeps included, and the number of vehicles with unique and fascinating stories behind them. For example, the CJ-2A from Malabar Farm in Ohio, photographed by Bob Christy for the January page and the cover. The '46 2A was owned by Pulitzer Prize-winning author Louis Bromfield. (The story of Malabar Farm and its Hollywood connections is told in more detail in the Summer 2019 issue of The Dispatcher magazine.)

Other unusual vehicles beautifully photographed for the calendar include a U.S.M.C. CJ-V35/U, a U.S.B.P. Traveller wagon, a dually Gladiator, and Andy Harvey's FC-170 fire engine. There are also some nice family restoration stories, and for CJ-3B fans there is Bob Miksch's Mint 1960 CJ-3B for December. 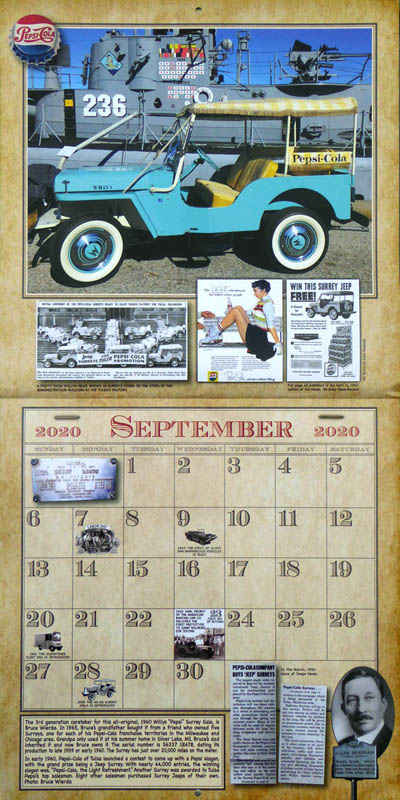 Another of the rare Jeeps in the calendar is a Pepsi-Cola Surrey, for September. Bruce Wierda took the photo of a Surrey that has been in his family for three generations (and is also featured in Pepsi Surrey Galas on CJ3B.info.)

The calendar page includes some clippings telling the story of the Pepsi Surreys, but surprisingly does not comment on the background of the photo, a U.S. Navy submarine. In fact, USS Silversides (SS-236) was one of the most successful submarines in the Pacific Theater of World War II, with 23 confirmed sinkings. (1) She later became a training ship, and was retired by the Navy in 1969. Like the Malabar Farm CJ-2A above, the submarine was restored by a dedicated group of volunteers. Silversides is now a museum and National Historic Landmark in Muskegon, Michigan -- see a U.S. Navy photo (220K JPEG).

It's not clear if there's any connection between the submarine and the Pepsi Surrey, but it does bring to mind a 1989 news story which has been widely repeated under titles such as "When Pepsi Had a Navy". (2) As part of a deal to expand sales of Pepsi-Cola in the Soviet Union, which had a lack of foreign exchange currency, the Soviet government turned over to PepsiCo a fleet of 17 obsolete diesel attack submarines, along with a decommissioned cruiser, destroyer and frigate, all of which were then sold for scrap. It was reported that Pepsi briefly had the "sixth largest submarine navy in the world." (3)

So that's one story that isn't included in Holy Toledo! 2020, but there are plenty of other stories and exceptional Jeeps to keep you entertained all year. -- Derek Redmond

See the most recent year and previous editions of the calendar reviewed on CJ3B.info.