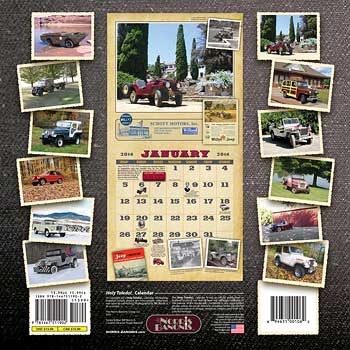 I've had a chance to pore over the "Holy Toledo!" 2014 calendar from Norris-Banonis, and believe me, it takes quite a while to read through the whole thing. This is more than just 12 great Jeep pictures to hang on your wall -- it's a package of historical information to keep you surprised and entertained every month. If you can manage to hang this on the wall without looking ahead through it, I guarantee you will say "Wow" when you turn the page every month.

How about if I review it month-by-month? That will give you an idea of what you have to look forward to, and make it easier to resist leafing through it as soon as you get it.

January, which you can see on the back cover of the calendar (right,) features a CJ-2A which has spent its entire life on the same ranch in Argentina. It's a good way to get started, since over this calendar's 8-year history, Bill Norris and Kevin Banonis have not included as many 2A's as you would expect, given that there are so many nicely restored examples of the early civilian flatfender. (If you own one that would look good in next year's calendar, you should contact them.)

February not only has a beautiful 1950 Station Wagon, but also the complete story of a road trip from North Carolina to Mississippi to visit the original owner. Very enjoyable to sit down and read, but maybe strays too far from the format of a wall calendar by including so much small type. March strikes a better balance, with a summary of the interesting background and restoration of an amphibious GPA, and a great collection of illustrations.

April is Bill Walsh's CJ-7, which takes me back to my own first Jeep, in the late 70's. This isn't the first time the calendar has expanded into the AMC era, but the 1970-87 period is a particular focus of this year's edition (and the subject of the informative bonus article at the end of the calendar.) 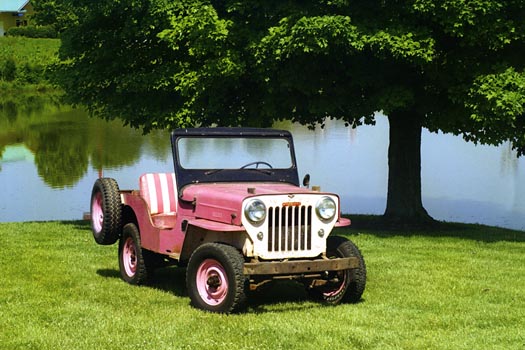 May is a treat for CJ-3B fans -- a nice photo of Bob Gibbs' factory pink 1961 3B (left.) The text stretches the point a bit, by calling it a Surrey Gala, but it's timely to see it here just after we've discovered the Cerulean Blue 3B Surrey.

June's photo is a long-wheelbase Coast Guard GPW, a vehicle that would be the focus of attention at any Willys gathering, and it's complemented by some great vintage literature and testing photos. The same is true for July, with the 66th anniversary of the Jeepster's public debut in Cincinatti marked with a shot of Colin Peabody's Jeepster.

September features an AMC Silver Anniversary CJ-5 from 1975, celebrating 25 years of the long-running model. And for October, there's not only pictures of CJ-3B Page contributor Frank Sanborn's red Jeepster Commando, but pictures of Frank himself as well. He's maybe the only owner to make the cut for the calendar two years in a row -- his red Gladiator was featured for August 2013.

There's another Gladiator for November 2014, this one in the rare Spring Green. The text is a bit misleading in saying that the Gladiator became "a truck of choice" for fire apparatus among other uses, since in fact J-trucks in fire service are also pretty rare.

December's dually CJ-6 Koenig wrecker is another unusual truck that would be the centerpiece of any Jeep show. The nice photo in the snow was taken by owner Brian Hainer. 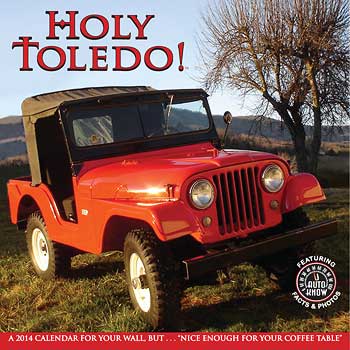 The cover photo, for the second year in a row, is a CJ-5. This one is a bit of a mystery, since it's not one of the 12 Jeeps inside, and I don't see a credit for it. If the cover shot needed to represent the era of the Kaiser to AMC transition, I would have voted for the green Gladiator or the red Commando, or maybe even the CJ-6 wrecker in the snow.

Also available online is the "Classic Fire Apparatus" calendar, which unfortunately has no Jeeps this year, and "Broken Down Heroes," with twelve months of Bob Christy's evocative black & white photographs of old abandoned vehicles, including a couple of Jeeps.